As interviewed by Lara Henerson

Since the mission of the Bay Area Film Mixer is primarily to create a sense of community for local filmmakers, what better way is there to do so than to showcase the broad variety of talented individuals in our midst? Introducing Garrett McDonald, a Navy veteran from Kansas, who has settled in San Francisco and now works as a location sound recordist and sound editor.

“I really connected with the work, because it reminded me of that same sort of military energy.”

I was born in California but I spent most of my childhood in Wichita, Kansas. I had a lot of different interests growing up. Eventually I joined the Navy, but it’s only been in the past four or five years that I’ve really honed in on what I wanted to do.

After the Navy, I enrolled at the Academy of Art University to study music production and sound design, on New Montgomery, here in the city. While I was there I started making friends with some people in the motion picture department, and they always needed somebody to help them record sound on set. I would just rent the equipment from the school and try to help my friends out. There really seemed to be a demand for that kind of work, so I decided that I might as well invest a good amount of money on some gear, and try and get some gigs.

I found myself really loving working on set. I really connected with the work, because it reminded me of that same sort of military energy. Everyone’s upbeat, on set running around and trying to get stuff done. And I just really jive with that type of energy. It’s very fast paced, and you have to think quickly. It’s always a challenge at the time, but then afterwards it’s a real rush to know that you still made things happen under those crazy circumstances.

“The tech industry is pretty much what pays the bills. I know a lot of people probably oppose it, but I think it’s pretty cool because it allows filmmakers to actually make some good money and survive around here in this expensive city.”

I’ve been working professionally now for just a little over two years. I started working while I was still in school. I had an internship at Studio Trilogy for about six months, and then at Polarity postproduction, all while I was going to school. I’ve had some work down in LA too but there’s a pretty vibrant film scene up here, and its really growing. There’s a ton of stuff happening and people are always looking for help. I’ve only been here about six years and I’ve already seen a major growth in the film community.

At the moment I’m working on a pretty cool prank video this Friday, for Lyft. The tech industry is pretty much what pays the bills. I know a lot of people probably oppose it, but I think it’s pretty cool because it allows filmmakers to actually make some good money and survive around here in this expensive city. It allows you to work and live here, and makes you comfortable enough so you can work on the films you’re passionate about. I actually think we’re really lucky to have that corporate industry up here, because otherwise it would be a lot more difficult for us to make art on the side.

Personally, I love working on short films specifically. I know there’s never a whole lot of budget for it, but it’s more fun to do than just shoot talking heads all day, you know? I like to be sold on a project. I want to know that my time is going to be invested in something that produces well.

“It’s so important for everyone to get together and talk about the work that they’re doing, and when you’re in the industry, you need to show people your face!”

The first Bay Area Film Mixer I went to check out was last October. I had a great time. Then I went again this year and I was like, Whoa, holy crap, there’s way more people here now! The industry is really expanding, and I love it. And the Mixer’s a great place to look for work. I got hooked up with a really passionate director and filmmaker from SF State. We started talking, and he wanted to get me on this project but I was unavailable at the time. But then a few months later he reached out to me again, and got me on this cool little short film called “The Dreams We Share.” We just actually wrapped that up yesterday. I’ve been out there working with him a lot, and I think it’s a pretty cool relationship.

I think the Bay Area Film Mixer is a really important place for filmmakers to come together. It’s so important for everyone to get together and talk about the work that they’re doing, and when you’re in the industry, you need to show people your face! Go, talk, have a good time, and let people become familiar with you. Let them decide whether they want to spend twelve hours on set with you!

To find out more about Garrett McDonald’s work, check out www.amplifilm.com.

You can make your own connections at the Bay Area Film Mixer! The next event is on Monday June 13th 7-10pm at Piano Fight. Register online at Eventbrite for free.

Dave Moutray is an accomplished screenwriter and director, with two feature films and various shorts to his name. I took a screenwriting workshop with him last year, and came away from it with so many ideas about what I wanted to write. I felt inspired. Dave will be teaching the Bay Area Film Mixer’s next workshop on writing for the screen. It’s coming up Saturday June 25, 12pm-3pm at Ninth St Independent Film Center. Tickets are available from Eventbrite.

Dominica: What are some of the key topics you’ll be covering in your workshop?

Dave: How to write a screenplay with only your toes. That’s right, I’ll be teaching keyboard yoga, from the lotus position (okay, none of that is true, plus I don’t really know what the lotus position is. Isn’t lotus a flower anyway?).

In all seriousness, I’ll be covering a number of the obvious topics that need to be discussed to tell any story that has a chance of being good (effective dialogue, structure, pre-writing techniques, etc), but beyond that, I’m excited to cover something I don’t think is covered enough at the script development level: writing for a budget. It’s one thing to write your story, it’s another to write it as something that can actually be produced.

Dominica: Who have been your biggest screenwriting influences?

Dave: Terrence Malick for his sense of character composition through V.O., Aaron Sorkin for his insane ability to write crisp and poignant dialogue, Joss Whedon for story-weaving with strong, vibrant characters, and Richard Linklater for the pathos he layers into his characters/stories. At a personal level, Matthew Jacobs (Emperor’s New Groove, Dr. Who, Paperhouse) has mentored me through my early writing career and is a large influence even still today. My first feature, Losing Her, was inspired by Matt’s first attempt at an indie feature (Your Good Friend) — it made me believe that I could do more than write features, but I could produce them as well. We are now on our second feature, and it all started from watching Matt tell a wonderful tale of a rabbi and a pornographer wanting to create a kosher porn website on an indie budget in San Francisco.

Dominica: What would you say are the biggest differences between writing shorts and features?

Dave: Besides one being longer than the other? There really isn’t that much difference in terms of storytelling — you still want a solid three act structure. Personally, I prefer writing features because you can dig deeper into characters and the world you build for them, but on occasion, a story I’ll discover is best told as a short film, so I’ll write it that way. That’s another facet of screenwriting — knowing the right format for your story to be developed in. I know some writers who will try to cram an idea into a short that really should be a feature, and others who will try to stretch an idea best suited for a short into a feature. Know the limits/potential of your story before you commit to a format.

Dominica: What kind of feedback is good to solicit from other people on a screenplay? Is it a good idea to talk to people before, during, and/or after the first draft is finished?

Dave: Noooo!!!! Only talk to yourself in a mirror. And scream at your monitor. Okay, that’s obviously not something I really believe. I caution moderation with sharing your story — pick a few that you know will be honest with you. The problem with talking to friends/family about your ideas is they tend to lose objectivity and will just tell you how great you are. Through the development process, talking to friends is fine, but rely more on those in the business. As you write it, join a screenwriting group and submit pages for feedback. When you have your first draft, submit it for coverage through respected services (Blue Cat, Scriptapoolza, etc). And develop a thick skin, because the feedback that will help you the most is usually the most painful to hear.

Dominica: Are there any books you recommend for screenwriters?

Dave: One thing that aspiring screenwriters often don’t consider reading is other scripts. You should read as many as you can. Connect with the format, the structure, give yourself a chance to get to know the style (how beats work with each other), and find your style of writing within the successful scripts you read (you can find a number of scripts here, legally: http://www.script-o-rama.com/).

As far as books go, I can’t recommend Save the Cat by Blake Snyder enough. The Screenwriter’s Bible by David Trottier is a must-have as well — one of the pitfalls of a screenwriter is not adhering to industry standards — there is no easier way to get a producer to stop reading your script, no matter how good it is, if your script looks like it was written by an amateur.

If you’re interested in learning more about screenwriting from Dave Moutray, sign up for the next Bay Area Film Mixer next workshop on writing for the screen. It’s coming up Saturday June 25, 12pm-3pm at Ninth St Independent Film Center. Tickets are available from Eventbrite. 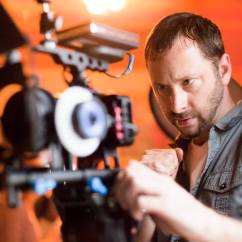 Dave Moutray, an award-winning Director and Screenwriter, has a M.A. in English and an M.F.A. in Screenwriting, and is co-founder of Crux Jinx Productions, LLC in San Francisco, CA. After winning awards for his short films, he tackled his first feature film, Losing Her, which won Best Feature at the Noor Film Festival in Los Angeles and the Golden Ace Award at the Las Vegas International Film Festival, and is now in post-production on his second feature called Lost in the Sun.

Dave has been trained by Matthew Jacobs (Emperor’s New Groove, Dr. Who, Paperhouse) and Robert Keats (head of Screenwriting department at Academy of Art University), and wholeheartedly believes as Alfred Hitchcock did, that “[to] make a great film you need three things – the script, the script and the script.”